About fifteen years ago, after working on the story of Disney’s animated film “Mulan” and co-directing “Lilo & Stitch” but before embarking on the trilogy “How to Train Your Dragon” , Canadian filmmaker Dean DeBlois has made a detour from animation to documentary film. His 2007 documentary “Heima” followed Icelandic band Sigur Rós as they toured their home country, performing huge outdoor shows and small concerts, intercutting with interview footage in which the normally mysterious group talked about their work and their lives.

DeBlois spends most of his time working in animation to this day, but he still has a taste for Icelandic music and a knack for knowing how to bring it to life. “Tíu”, which premiered at the Tribeca Festival, takes a different Icelandic band, Of Monsters and Men, and follows them on a trip across the country where they play music in a variety of locations that have a special meaning for the members of the group.

But where “Heima” found Sigur Rós most often performing to large crowds, the 48-minute “Tíu” documents a journey that was necessarily private rather than public. Forced by the COVID-19 pandemic to cancel a tour that would have celebrated the 10th anniversary of their debut album, “My Head Is an Animal,” the band members simply played to themselves – in a lighthouse, on a boat, in empty rooms both large and small.

The result fails to capture the more upbeat, fully produced modern folk sound that has made Of Monsters and Men one of Iceland’s most successful musical exports since Bjork and Sigur Rós; the band’s music in the film is mostly acoustic, smooth and surprisingly intimate, even when playing against the vast spaces of mountainous, rural Iceland.

DeBlois, one of two cameramen on set, lays back and beautifully captures the beats of the music and the band members themselves, who tell their story with quiet humor and unrelenting understatement. They sit, reminisce, laugh and slip into song, and it’s all in one piece – not a concert film, but a sweet, lyrical conversation with the band and with the earth.

The best-known Icelandic music of the past few decades has generally been atmospheric, as these songs are, but also more aggressively experimental. And while Of Monsters and Men have a way of introducing quietly adventurous elements into their music, “Tíu”‘s performances are stripped down and simple: mostly acoustic guitars from Ragnar “Raggi” Þórhallsson and Brynjar Leifsson, understated bass from Kristján Páll Kristjánsson, a mix of instruments, including percussion, by Arnar Rósenkranz Hilmarsson and vocals, occasional guitar and keyboards by Nanna Bryndís Hilmarsdóttir. 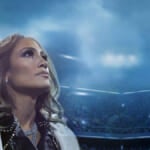 Beginning at Hilmarsdóttir’s great-great-grandmother’s house with a rendition of the lovely, upbeat “Sugar in a Bowl”, they tour the country performing a medley of songs, most of them more old ones that they haven’t recorded so far. (There is an EP, also titled “Tíu”, which accompanies the film and features more aggressive versions of certain songs.)

While Þórhallsson, who primarily shares spokesperson duties with Hilmarsdóttir, says he hates “nostalgia or memories” at some point, there is undeniably something nostalgic about the songs which, in some cases, date back to their teenage years. But it’s utterly seductive nostalgia as the band traverses a succession of soft dreamscapes that become even more haunting for the way DeBlois films them with beautiful economy against the stark and beautiful Icelandic landscape.

It’s intimate music in an expansive setting, and a great way to capture the artistry and humanity of this band. Aside from a brief outburst towards the end, it’s a relentlessly understated approach that doesn’t capture Of Monsters and Men’s range of music – but it’s a fine take on the band nonetheless, and one that never wears its welcome. 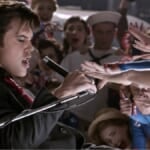 Nathan Drake (Tom Holland) was conceived as a throwback to Indiana Jones and the serial adventure films that inspired him. He should be a soft-spoken treasure hunter, someone who exists in a slightly gray moral zone where stealing priceless artifacts is justified because no one else can truly appreciate them like Drake. Holland has the […]

Action-thriller “Limbo” has been named Best Film of 2021 at the annual Hong Kong Film Critics’ Society Awards. The film’s lead actress, Chinese actress Cya Liu, won Best Actress for her role as a young drug addict. The results of five awards and 10 recommended films were decided on January 16, 2022 after nine hours […]

Cam’s hostage experience – she’s the EMT in Danny and Will’s stolen ambulance, if you haven’t assembled it yet – will reignite her passion for saving lives? Who’s to say? What can be said is that once the ambulance embarks on a “Speed” type chase through the streets of oddly traffic-free Los Angeles, the stakes […]